Batman V. Superman opened this weekend to the tune of $166 million. Definitely a contender for a blockbuster run, the movie already trumped Dark Knight Rises’ opening. Despite being virtually obliterated by critics, the audience reaction has been extremely positive. Since most movie critics aren’t paying customers, it’s safe to say that director Zack Snyder made the right choice.

Even though it’s only the first weekend, the movie has already seen its fair share of dueling merchandise. Everything from breakfast cereals in rival flavors to these custom flash drives.

From Emtec, these stylish USB drives come in three varieties: Team Bats, Team Supes, and one featuring the now iconic symbol for both. Each drive features a cool jack knife-style USB port and holds up to 16GB of data. You can pick them up individually to support your favorite hero, or in a 2-Pack. 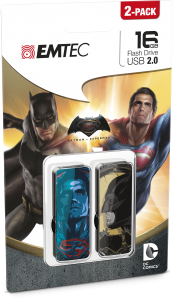 Emtec very smartly packed these puppies together so that you can save the one of your pick and give the other to your best friend. Or nemesis. Either way, the drives are like grown-up versions of those “Best Friend” necklaces from back in the day. You can show your pal that you think they’re great even if they don’t have any powers except for being rich. Let them know you love them even though they might be a godlike alien not of this world. I don’t know about you, but I’ve been waiting to send that message to my best friend. Plus, they’re fully-functioning flash drives too. You know, because we’re adults.

But that’s what makes it such great licensing. Superhero flash drives have the potential to reach a more mature crowd that still might be kids at heart. Who doesn’t love a good superhero movie? Unfortunately, we can’t always justify toys, but we can certainly sell ourselves on digital storage devices. Just another practical office supply…with Batman on it.